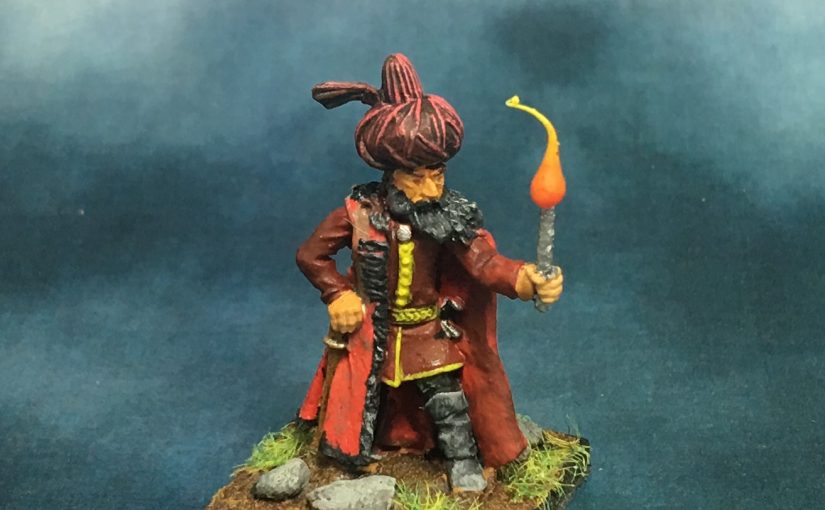 These are two more oldies that I’ve rebased and added some fire effects.  The first is from a 3-pack of sorcerers from RAFM 3808 Sorcerers.  The second is from Metal Magic’s Dwarf range; C1008n Leader, Armored.

The sorcerer’s baton or wand or whatever it was supposed to be broke off, of course.  I drilled out his hand and super glued a piece of paperclip in it.  I held the mini upside down and dabbed hot glue on the end of the paperclip.  Then I painted the stick silver and flame orange and yellow (let’s call it an everburning torch.)

For the dwarf, I used an Xacto knife to cut two small slivers of balsa wood, glued them together, and painted them brown. Then, again, I held the wood bits upside down and dabbed four bits of hot glue on the ends.  This one was more difficult;  the hot glue was very stringy and didn’t break off.  So I had to cut the strings off with clippers.  Then I painted the flame with some blue, orange, yellow, gray, and black.  Clearly, he is taking a breather after all the pillaging and plundering he’s been up to. 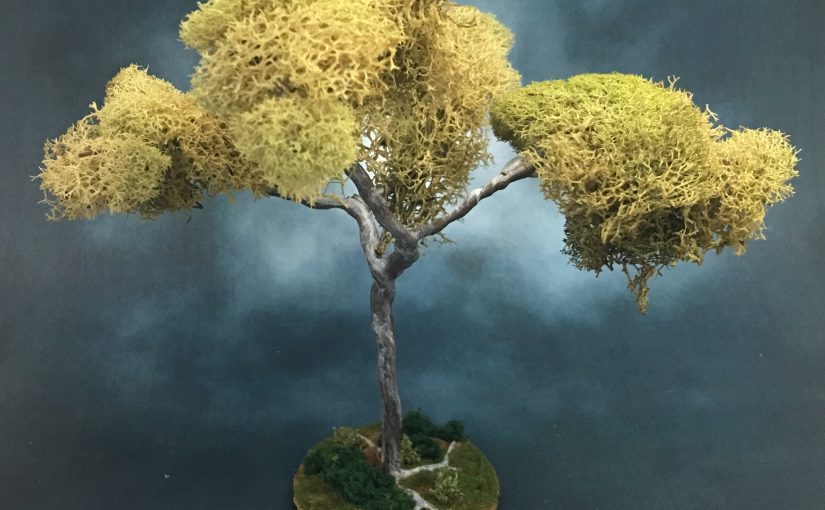 I saw a nifty tutorial on how to make wireframe trees on YouTube, so I thought I’d try my hand at making some as scenery for the tabletop.  I’ve also been thinking about making some tents and peasant huts, so maybe I’ll have more terrain pieces here in the future.

Three of the trees have moss stuck to the branches with hot-glue.  The other has Woodland Scenics vegetation.  They look nice to me, but I worry that they would obstruct the view of the tabletop and make it hard to move minis around without knocking over the trees, which would knock over other minis, etc. I’m tempted to make more and just leave them as bare wire.  That gives them a cool winter or dead tree look and they obstruct the view much less, with the disadvantage of getting pricked by the wires every time you handle them.  Shrug.

Here are the tree experiment results: 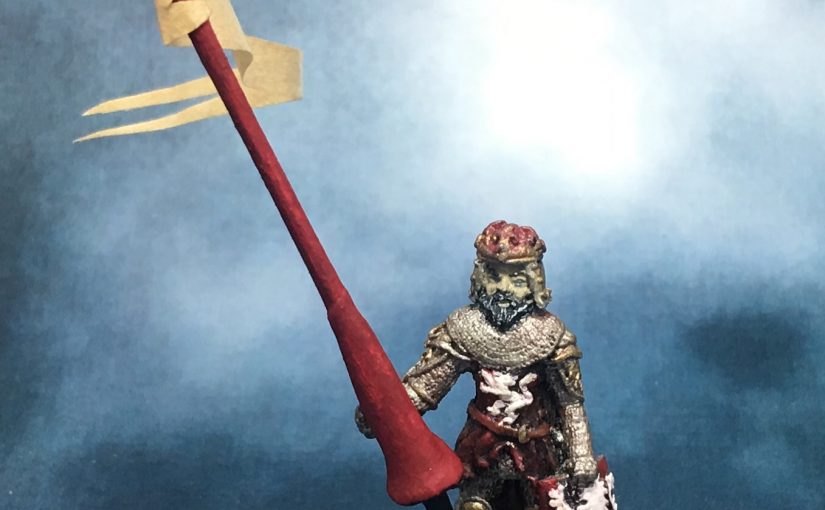 I think this guy came in a really early “Learn To Paint” type box set.  I can’t find the mini in any of the catalogs though, so I don’t know who made it.  If I find it, I’ll edit this with the info.

He originally came with spear or banner or something.  That’s long gone, of course, so I made him a lance.  My sculpting skillz are sub-par though, so you can see where the Green Stuff that I molded around the toothpick isn’t seamless with the toothpick.

I was also tinkering with scrolls and banners, and put a long streamer on the lance to see if I could get a “blowing in the wind” effect.  If I were more inspired, I would have painted something cool on the banner… 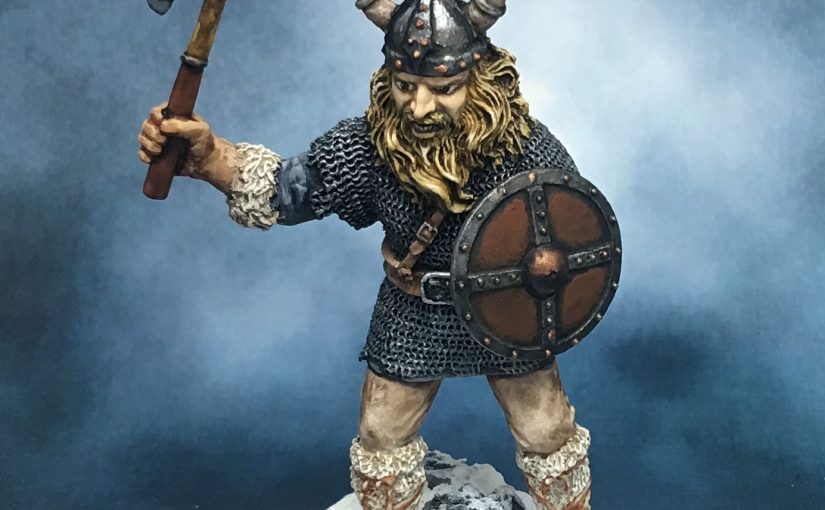 This is an old Ral Partha frost giant.  It’s quite different than Boerogg.  This one is from before things got quite so cartoony in D&D art.  Early versions of D&D had giants conceptualized as extra large humans, with frost giants modeled after vikings, like this guy.

The snow is washed out in these photos, sorry.  But that’s just as well; I didn’t get he snow mixture quite right here.  It was a little too thick, so it didn’t self-level well and had some bubbles in it that show in real life. 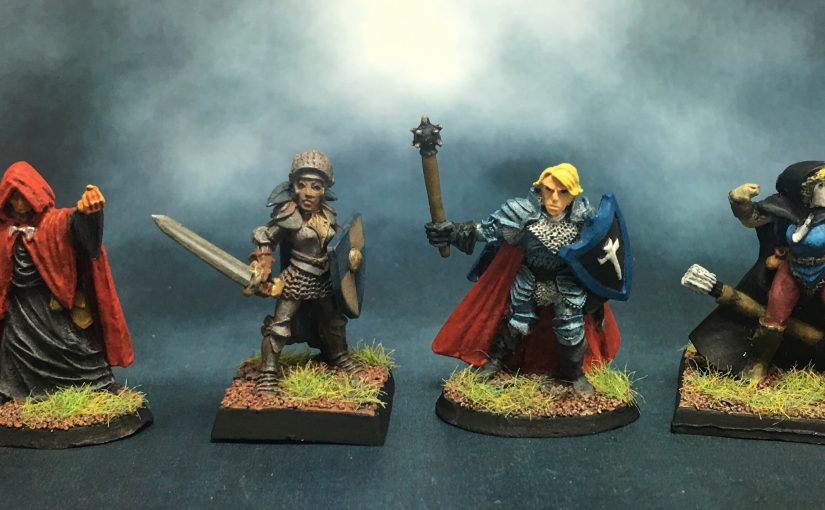 Here are nine more oldies I painted ages ago.

The first group I left with the bases I originally gave them.  They include:

The last mini I have not modified; it is my first attempt at a snow base. I used cotton, which you can see is now discolored.  I was also shooting for a frosted armor appearance.  He is from 1994 Games Workshop, like the female fighter above. 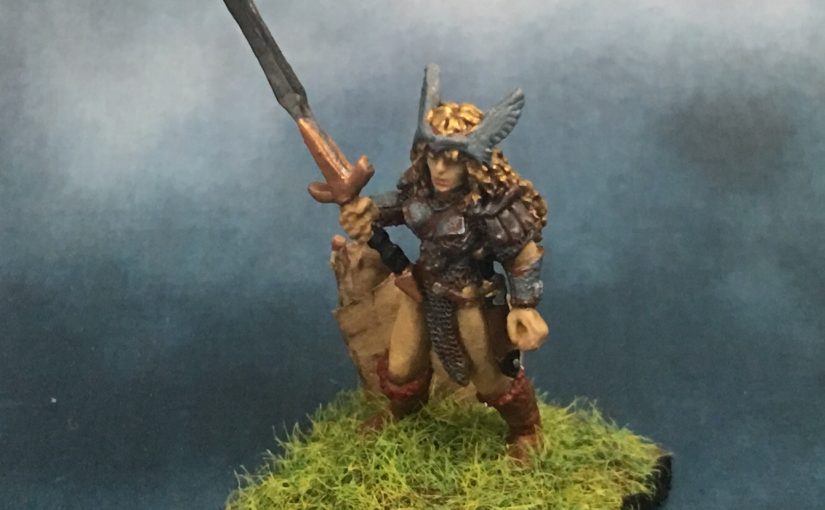 Here is the female counterpart to the Ral Partha 11-001 Fighters male in the previous post.

I was tinkering with making scrolls and banners. I don’t really have any idea why there would be a large scroll sitting in the grass behind this warrior. Maybe she just read some proclamation of death and destruction against her enemy, and now she is sallying forth to dish it out…or something… 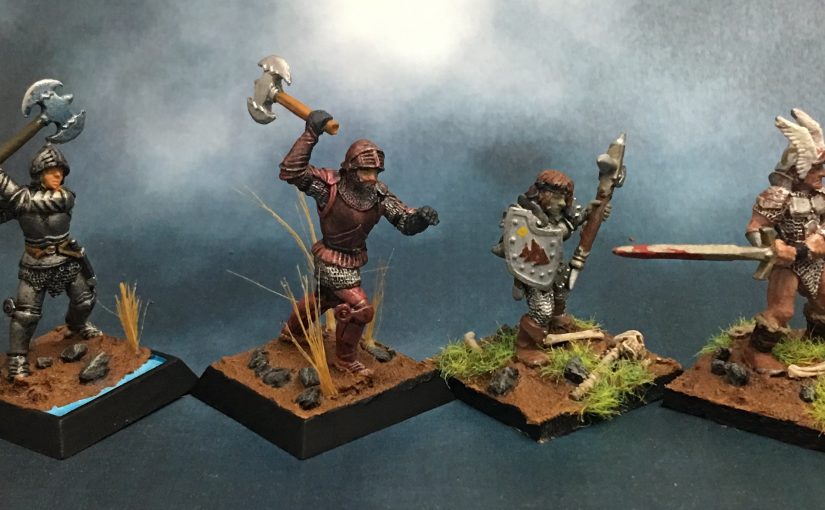 Way back in 2008, I was paring down everything I owned to just the bare essentials. I gave away my entire mini collection to my great friend Jim.

I went to visit Jim a couple weeks ago and he gave me all my old minis back!  What a guy.

They had seen some rough treatment over the years (Jim plays a lot of D&D!) Many of them were never put on proper bases. So I gave them just a little TLC to cover up some of the chipped paint, and then gave them some more interesting bases.

Back when I painted these, I was tinkering with adding colors to silver to make colored metal. Thus, the two axe fighters here have reddish armor. The red was the least satisfactory color to mix because red + silver comes out a bit pink. Other minis, that I’ll post later, have green or blue steel armor

Most of these are from Ral Partha packs that each came with a male and female pair.  From left to right: 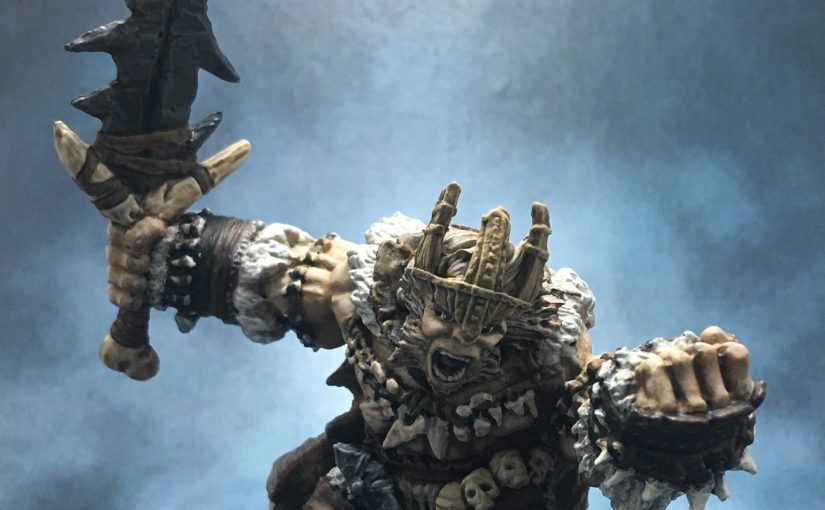 I worked on this guy off and on for darn near a year I think. I got side-tracked by playing World of Warcraft. Also, the paint I was using for his skin was the Reaper Pale Flesh triad that had the clotted highlight color, which I posted  about a few months ago. All the nooks and crannies in this guy were tiresome, too. There might be such thing as too much detail…at least for lazy me.

Most people these days make frost giants’ skin blue; a visual cue that the guy is cold-related.  I don’t really like that.  In my mind, giants are really just extra large people who live in certain habitats.  So this guy is up in some muddy tundra somewhere, getting angry.

I agonized over the colors, of course.  A continual problem I have is in getting realistic colors that aren’t drab.  This guy is pretty drab.  The mini painters I admire most are able to paint with bright eye-popping colors while still getting the overall tone come across as muddy and drab.

Anyway, this guy has a sword made of bone strapped to a huge hunk of slate.  He wears polar bear fur that’s been dragged in the mud a bit.  I’m happy with the way he turned out. He’s obviously a collector of trophies, and he’s got quit a few strapped to his arms, chest, waist, and hands.