This “Wind Elemental” is a mini I received as part of what I’ve dubbed “The Ennis Collection.”  A wonderful friend of many years and her father gave me a large box of over 120 miniatures, mostly from Grenadier box sets.  This mini is from about 1980; the Grenadier AD&D Monsters 5002 box set.  The box was discovered as her father was cleaning out his home to move closer to his daughter and her family.  Her brother purchased these for his D&D games when he was a teen.  Sadly, her brother died early, so these went unused and unnoticed for many years.

I felt that the mini looked a bit too much like a benign cloud, rather than a living tornado of death and destruction that would strike fear into the hearts of knights and wizards, so I took it upon myself to improve on it.  I sculpted whirling blade-arms (inspired by my Ninja blender) and a gathering cloud of swirling storm around the base with Green Stuff.  Then airbrushed most of it.  Finally I gave him some glowing eyes shining out from the vortex.  I think the results are quite a bit more fearsome, and the arms and large base make him more substantial on the playing table. 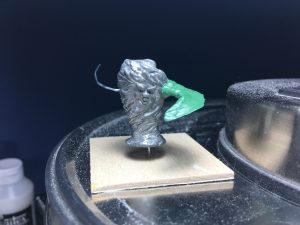 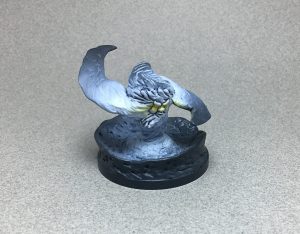 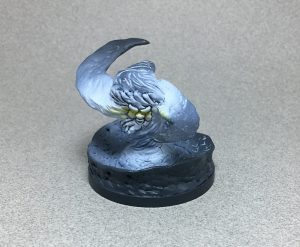 One thought on “Wind Elemental”